Oregon’s Tualatin Valley is the most culturally diverse region in the entire state of Oregon. Here, many cultures are represented, resulting in a robust culinary scene. This month, we want to celebrate the black-owned businesses that add to the flavors of Tualatin Valley. 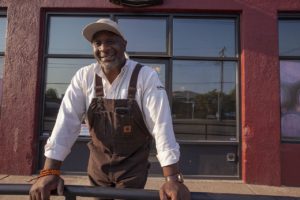 Bertony Faustin of Abbey Creek Winery in North Plains, who has been producing exquisite Willamette Valley wines since 2008, was the first black winemaker in Oregon.

Abbey Creek Winery | 31441 NW Commercial St. | North Plains
Bertony Faustin, owner and winemaker for Abbey Creek Winery, is passionate about wine. Using grapes grown on the estate vineyard, Bertony has been producing and selling his Abbey Creek wines since 2008. As the first black winemaker in Oregon, he wanted to share his passion—and his experiences—about winemaking in Oregon. The result is his documentary, titled “Red, White and Black,” which premiered in 2019. Abbey Creek’s North Plains tasting room is open Saturday-Sunday, 12-5 p.m.

Clinton’s Kitchen | At The Garages Satellite Pub | 4810 SW Western Avenue | Beaverton
In Beaverton, Clinton’s Kitchen has been serving Cajun and southern comfort food since April 2017 at this Beaverton food cart pod. Clinton’s is open for lunch and dinner, Thursday-Sunday.

You're invited to explore Tualatin Valley. Close to Portland, yet worlds away. Start planning your epic getaway today.

Our hotels are close to Portland and have many urban amenities, but are only a fraction of the cost.

Trivia nights seem to be growing in popularity as a way to pack bars on off nights and as the perfect weeknight out with friends. Tualatin Valley has dozens of taphouses and pubs offering trivia nights.

If you’re looking to make the most of your extra day in 2020, be sure to check out one of the many fun activities you can do in Tualatin Valley.

Valentines Day isn’t the only occasion to celebrate love with your sweetheart. No matter the occasion, you can make date night (or date weekend!) special in Tualatin Valley.