Oregon’s Tualatin Valley already has a reputation of being home to some of the Portland area’s best Asian eateries. Now, despite the challenging times of COVID-19, several new restaurants have opened, including highly anticipated offshoots from Portland favorites.

Whether you want to stick with takeout or have a new dining experience, try some of Tualatin Valley’s newest Asian restaurants. 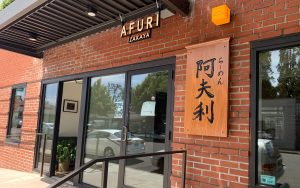 Afuri Izakaya started in Toyko and opened its first location outside Japan in Portland in 2016. The company chose Portland because of its soft water, which absorbs flavor better, Afuri US CEO Taichi Ishizuki told Eater. Afuri’s specialty is its Yuzu (citrus) style ramen.

Afuri is open for takeout only right now, but ramen is perfectly packaged for to-go. They separate the noodles from the broth so they don’t get soggy before you re-heat and eat! When Afuri opens its dining room, you can look forward to a sleekly designed restaurant and bar in downtown Beaverton’s growing food scene.

Another Portland favorite to branch out into downtown Beaverton is Top Burmese. The new Bistro Royale opened (for takeout only) in April 2020. The original Northwest Portland spot actually opened as a “virtual restaurant” first back in February 2019 before opening a dine-in space in October 2019.

If you haven’t tried Burmese food, it’s similar in some ways to Chinese and Indian food, with curries, noodle dishes and samosas. Many items on the menu are vegan. Top Burmese is also known for its fermented tea leaf salad — laphet thoke. The owners grew up in Myanmar, where their mothers influenced their cooking.

Bistro Royale is currently open for takeout and dine-in. The former First Street Taqueria space has been transformed with the help of neighbors Staghorn Mercantile on plant design.

Meat and Veggies on a Stick

Skewer Bar held a soft opening in March for takeout and delivery. The Chinese restaurant specializes in, you guessed it, skewers! They offer meat and veggies skewers as well as rice plates, pork buns, lettuce wraps and more. For a sweet treat, try their milk tea and boba smoothies.

Skewer Bar is currently open for takeout and delivery only.

Give these new restaurants the support all businesses need right now and see why Tualatin Valley is known for amazing Asian food.

Another restaurant that has powered through the dine-in shutdown was Queenz Asian Cuisine. This family owned spot in the Raleigh Hills area had just celebrated its grand opening in February before pivoting to takeout.

Owner Tracy Nguyen told Good Day Oregon she wanted to give back during the troubling times by serving thousands of free meals to front line heroes workings at more than 14 healthcare facilities in the area.

Queenz specializes in authentic Vietnamese and Chinese food. They are currently open for dine-in, takeout and catering.

Delicious treats are aplenty in Tualatin Valley, but if you’re looking for a unique twist on classic pastries, bread and cakes, visit one of these Asian-inspired bakeries.

Asian-inspired restaurants provide some of the best eats west of Portland.

SakéOne is the leading brewer of craft saké in America. SakéOne leads the fast-growing category with distinct styles, flavor infusions and a penchant for education and sharing their unique beverage.

If you’re looking to get out of the house and support local businesses while staying socially distant, try one of these spacious patios with delicious food and one of a kind brews.

U-pick season is just beginning as an assortment of berries ripen in Oregon. Here are just a few of the farms where you can enjoy the bounty of Tualatin Valley.

Washington County (Tualatin Valley) has been approved for Phase 1 of reopening. Whether you live in Oregon or are visiting from out of town, it’s important to know what to expect when you’re here.