From Pilsners and Pale Ales to Porters and Imperial Stouts, Tualatin Valley offers a large variety of breweries and taprooms pouring every shade imaginable of craft beer. Make your meal memorable and pair a pint with a dish made from locally sourced ingredients and enjoy! Here are just a few local breweries creating delicious food and impressive brews for the perfect beer pairings. 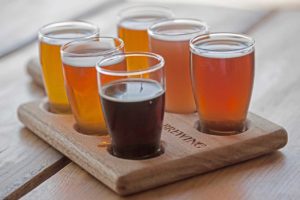 The Lodge at Cascade Brewing
In Beaverton, The Lodge at Cascade Brewing was founded in 1998 by one of Oregon’s “founding fathers of craft beer,” Art Larrance. With more than 20 craft beers on rotating taps including The Lodge’s collection of award-winning Northwest sour ales, it is not difficult to find something new to try. Order a glass of Oregon’s Own which features 100% Mecca Grade malt from Madras, Oregon, aged in Willamette Valley Pinot Noir Barrels and flavored with Bing cherries from Mosier, Oregon. Pair this sour ale with the menu’s Reuben Sandwich and fries or the Beer Cheese Bacon Chicken Macaroni.

Ambacht Brewing
Ambacht Brewing in Hillsboro specializes in Belgian inspired Ales brewed with Belgian yeast and honey. Each Ambacht Ale is made using local and organically grown ingredients and Willamette Valley grown hops. Outside food is allowed in the taproom so bring a charcuterie board with a variety of bold cheeses to pair perfectly with an Ambacht Farmhouse Ale.

12-11 Brewing
Smockville Brewhouse in Sherwood creates both great food and drink with 12-11 Brewing. The beer selection features crafted brews made in-house like the Busted Knuckle Porter. This dark-colored, light-bodied porter with chocolate and coffee flavors would pair well with the BBQ shredded chicken burger tossed in sweet and spicy berry BBQ sauce and topped with white cheddar cheese and coleslaw. If you want to try a fun starter item off the menu, Smockville serves up a pint of smokey, peppered or candied bacon.

Deep Space Brewing
Located in Hillsboro, Deep Space Brewing is known for its small-batch beers they have been producing since 2017. Their list of beers is continually rotating with popular favorites, seasonal brews, and some beers that “were brewed once and then lost to deep space.” If you plan to visit, try the Deep Space Marshian Peat Scotch Ale paired with the Veggie pizza topped with zucchini, black olives, red onion, feta and house-made marinara. Deep Space also offers their own brewed Zero Gravity Root Beer for a nonalcoholic option.

There are tasty beers and beer pairings aplenty in Tualatin Valley so plan to spend a few days brewing hopping to try them all.

When it comes to excellence in hand-crafted beverages, the Pacific Northwest—and the Greater Portland region in particular—outshines any other location in the U.S.

The vastness of Tualatin Valley, especially when venturing beyond the urban cities, offers innumerable options for outdoor (and indoor) recreation.

Located in the northern Willamette Valley, we are the gateway to Oregon wine country, Portland’s next-door neighbor.