The Eastern Arm of the Quilt Barn Trail

Block: Lone Star Variation
This bright red barn was built in 1991 and is owned by the third generation of the Hesse family. The farm grows oats, corn, wheat and peas. The Hesse family has a deep connection to Texas, the Lone Star State. (Best view southbound on River Road) 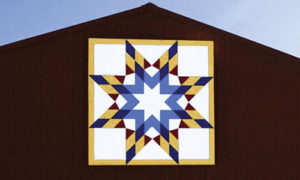 Block: Crossed Canoes
The barn here is in the park and was built for agricultural uses circa 1943. It is on a quiet stretch of the Tualatin River and the Tualatin River Greenway Traill, which opened in 2016 for walking and biking. A traditional block with greens and blues was perfect for the site. 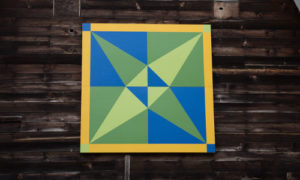 Block: Morning Star
D’Topia is named for the upstairs office where digital innovation occurs. Built in 2015 and owned by the Muller family, the barn features a pattern from the Lakota people’s traditional “owinja” to show the family’s connection to the Lakota. 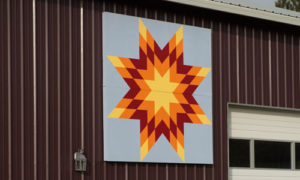 Block: Rolling Star
This barn was built in 1895 and was originally a dairy barn. The traditional block was chosen by the family, who agreed this was one of their favorites. The yellow is a nod to the University of Oregon and the crimson to Washington State University. 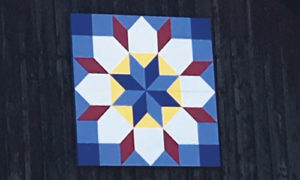 See a map of all current quilt barn sites >>>

Block: Moon Over Mountains
Chosen because of the spectacular view from the farm site, where they can see Mt. Hood, Mt. Adams, Mt. St. Helens and Mt. Rainer. The block depicts the four season. (Visibility is somewhat limited, so be cautious at the corner) 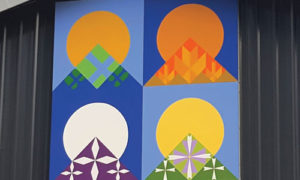 Block: North Star
This interesting old barn was built between 75-100 years ago and features a daylight basement. This block was chosen from an Underground Railroad family quilt. Gail Humphrey studied Black American history and was inspired by Harriet Tubman and the Underground Railroad. 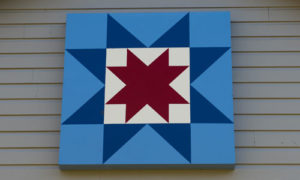 Block: Turkey Tracks
The Kinton Grange was built by its members in 1917 and is the only remaining continually functioning building in the old Kinton Community. The grange serves as a hub of activities for farm and rural families, with potlucks, dancing and social occasions of all kinds. 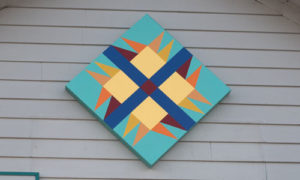 Block: Friendship Star (variation)
Established in 1923, the Laurel Home Club is still used for community events. This Friendship Star block, with its vibrant colors, was chosen to celebrate the closeness of the community and the many friendships that came from gathering there. 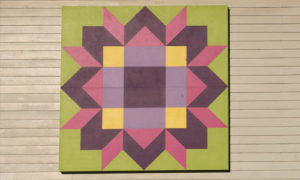 Block: Maggie the Cow
Built in 1916, this barn was used as a dairy barn until 1977. The block symbolizes the Holstein cows that lived there. (Use caution, traffic visibility may be poor) 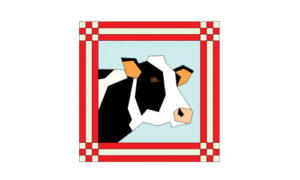 Block: Dutchman’s Puzzle
This old building dates from the 1950s. The inside has been maintained and houses places for charity sewing and food distribution for families in need. 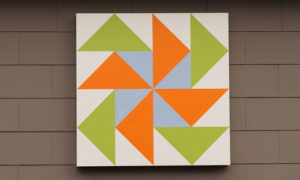 Block: Sunflower
Built in 1946, this historic government barn was one of three built after World War II. Initially it was a dairy, like many in the area, but has been repurposed as a nursery. 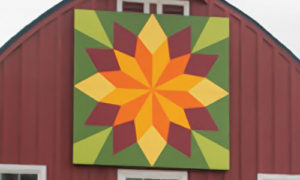 More about the Quilt Barn Trail